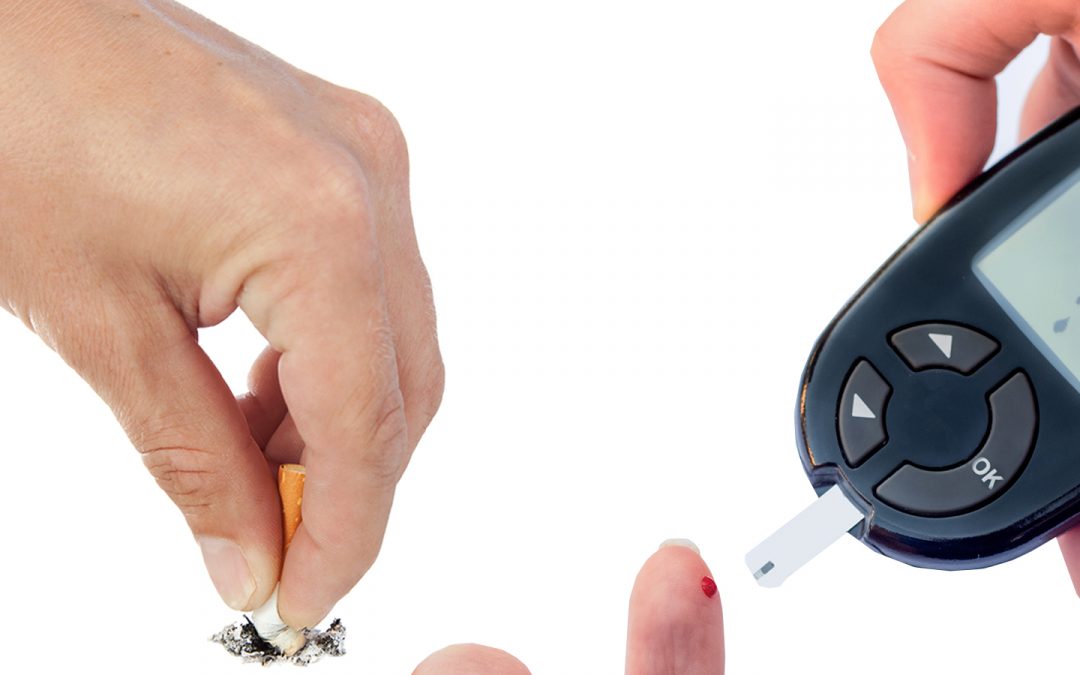 Smoking can wreak havoc on the body and dramatically increase the chances of developing health complications such as heart disease, stroke, chronic bronchitis, emphysema, chronic obstructive pulmonary disease (COPD) and cancer for anyone. For those with type 2 diabetes, this habit can be especially dangerous.

Tobacco and its toxic components promote hormonal alterations in the body and increase the chances of developing type II diabetes.

In fact, people who smoke (even those who do so passively or through second-hand smoke) have a near 30 – 40 % risk of developing diabetes mellitus (or type II) compared to those who avoid it altogether.

People with diabetes who smoke often have serious problems absorbing exogenous insulin or conventional hypoglycemic drugs such as metformin to treat this disease.

No matter the type of diabetes, smoking will always negatively affect the prognosis of the disease and complicate medical management. This is because the toxic substances in tobacco (mainly nicotine) deteriorate various functional systems of the body involved in compensatory responses to the state of hyperglycemia (that is, a lot of glucose in the blood).

How does nicotine affect those with diabetes?

Both the nicotine in tobacco and high blood sugar levels are harmful agents for the body. Both cause tissue damage, chemical alterations within cells, delay the healing of pre-existing diseases and predispose to chronic diseases such as cancer.

Nicotine is an alkaloid-like chemical substance that has the incredible ability to cross membranes and tissues because it combines with water despite being entered through the respiratory system when inhaling cigarette smoke (more than 60% of body weight is water ). About 3% of ingested tobacco is pure nicotine and although it may seem small, it is a significant concentration, especially in patients who are capable of smoking large amounts of cigarettes per day (chronic tobacco addiction).

Among the effects of nicotine in the body, the most important are:

Diabetes is a complex disease that causes damage to the body’s artery walls, predisposing to the development of atheroma or fatty plaques (atherosclerosis) and hardening of the body’s blood vessels. Many diabetic patients end up dying from occlusion of arteries in the brain or the heart, two organs with a high demand for blood flow (heart attacks and strokes, respectively).

Nicotine enhances hardening of the arteries and damage to the innermost layer of blood vessels called the tunica intima. A diabetic who smokes has twice the risk of developing a fatal condition such as blood clots, heart attacks or strokes (also known as stroke).

Nicotine is highly addictive and the smoker increasingly requires consuming larger amounts of tobacco to meet the biochemical demands of the brain. This complicates treatment, because many diabetic patients develop stress and anxiety and therefore smoke more to feel calm.

This hormone (insulin) is responsible for the assimilation of glucose within cells and acts similar to a key that opens a lock (the protein channels in the cell membrane) so that this molecule enters and can be used to produce energy . If insulin is lacking (type I diabetes) or cells become resistant to it (type II diabetes), glucose builds up in the blood and is not used by the body.

But, what about chronic smokers? Well, nicotine and many other toxic chemicals in tobacco are even as bad for the pancreas as alcohol can be. In fact, both are directly responsible for 75% of all cases of acute pancreatitis (an inflammation of the gland).

Tobacco promotes the development of inflammatory processes in the pancreas, fibrosis in the glandular tissue and in severe cases, pancreatic cancer (nicotine is a powerful carcinogen).

When an organ such as the pancreas becomes fibrotic (a condition known as pancreatic fibrosis), the blood supply decreases and the cells begin to fail, releasing much less hormones and substances useful to the body such as insulin.

If the body has difficulties assimilating this hormone (type II diabetes) and each time pancreatic production decreases more and more, the little insulin produced is insufficient to maintain blood glucose in physiological terms and the patient’s health status worsens and complications may arise serious (which we will see later).

What complications associated with nicotine can develop in diabetics?

It is important to note that although all these complications are typical of uncontrolled diabetes and occur in severe cases, the consumption of nicotine (through smoking habits) significantly increases the risk of presenting them, especially due to factors related to vascular and endothelial damage.

The most frequent complications induced by nicotine consumption in diabetics are:

Myocardial infarcts. Which frequently occur when blood clots form within the coronary arteries that supply the heart muscle itself. The endothelial damage caused by diabetes added to the damaging capacity of nicotine promote the formation of thrombi (clots) that obstruct the blood vessels.

Heart failure. Nicotine and hyperglycemia can damage the heart valves, causing blood to regurgitate within the chambers that make up the organ and leading to heart failure. This condition can also occur after a heart attack.

High blood pressure. Nicotine and hyperglycemia (in addition to high levels of fat in the blood) tend to limit the natural ability of the arteries to stretch under the tension of the blood contained within them, causing hypertension and increasing the risk of heart attacks and heart failure. Hypertension also tends to cause fibrosis in the pancreas, where insulin is produced.

Strokes. Strokes are quite common in diabetics who smoke and occur when some region of the brain is left without blood supply due to a sudden obstruction (ischemic stroke) or due to the rupture of an artery (hemorrhagic stroke). Nicotine weakens the arterial walls and makes them susceptible to rupture, especially in hypertensive patients.

Kidney failure. This severe and life-threatening condition is secondary to tobacco use in kidney patients and occurs when the kidneys become insufficient to filter and purify the blood of toxic substances. Most patients with kidney failure (diabetic nephropathy) must undergo dialysis and their prognosis is poor, especially if they continue to smoke.

Ulcers. What happens when certain regions of the body (especially the feet and legs) are left without blood supply due to causes related to nicotine consumption and diabetes? The tissues are left without blood supply and the cells die (necrosis). The complication known as “diabetic foot” is three times more frequent in patients who, in addition to being diabetic, smoke.

Amputations. If tissue death occurs, it is necessary to remove the affected tissue to avoid infection in healthy tissue. Many patients with diabetes must undergo amputations of fingers, feet and even legs.

Blindness. Diabetes can cause a complication called diabetic retinopathy that can lead to irreversible vision loss. This occurs when the delicate tissues of the retina (the site where images captured by the eyes are converted into nerve impulses that go to the brain) and is much more common in patients who use nicotine.

Loss of sensitivity. It occurs due to damage to the peripheral nerves (that is, they go to the most distant sites such as arms or legs) and its real name is diabetic neuropathy. Most patients with this condition may even have wounds and not feel pain, favoring infections. Hyperglycemia directly damages nerve fibers and nicotine reduces the turnover of myelin, a substance that covers and protects nerves.

Benefits of quitting smoking in diabetics (or avoiding doing so)

As soon as a smoker decides that they want to quit smoking, the body begins to respond favorably within a few minutes.

For example, within 20 minutes of quitting smoking, blood pressure and heart rate drop to normal levels and within 12 hours, the amount of carbon monoxide in the blood drops to normal levels (this gas binds strongly to hemoglobin preventing it from binding with oxygen).

Three months after quitting is enough for blood circulation and breathing to improve significantly. This is incredibly positive in diabetic patients since the state of hyperglycemia depletes the body and causes cellular stress.